When we were on the look out for a bike for Penguin I had already decided I would like him to have a balance bike so he could master the art of balancing. He hasn’t really had any experience of peddling, so that will have to be mastered at a later stage. I’d read alot about bikes and researched which would be the best balance bike to get. As Penguin was going to be 5 when he got his first bike I needed to make sure he wouldn’t out grow it within a few weeks. Most of the balance bikes on the market are quite small, I measured his inside leg and  looked at which bikes would allow him space to grow. You can buy some really light balance bikes, which are great for younger children. As Penguin was on the older side I wasn’t too worried about having a heavier bike.

We settled on a Stompee Balance Bike, which is 4.2kg. Penguin got the hang of it really quickly. I love the fact that he is so in control of it so when he is cycling, the risk of him falling into the road/water is mimimal!

Penguin has been riding this bike for a year (soon to progress to a pedal bike- which will come with a new set of challenges) and it has been a brilliant choice. I wanted him to have a bike that he enjoyed to ride and wanted ride. I don’t think I can remember a time when he didn’t want to go out on his bike.

This bike is fun and easy to ride. It has a back break which has been really useful when going fast downhill and a good skill to master early on. Though the Stompees I’ve seen recently for sale don’t have this feature, I’m not sure why. Penguins confidence has grown and I am hoping the tranistion to a pedal bike will be smooth. Though I am a little nervous! 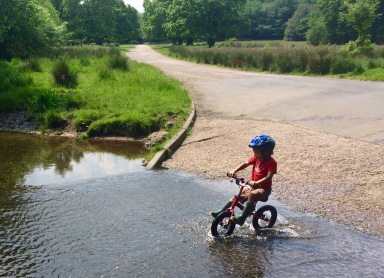 Penguin asked me the other day, ‘After I get a bike with gears will I get a motorbike?’ I’m not quite sure what I think about that!

Penguin’s favorite colour for the past year has been red, so he was very pleased with the colour. The Stompee also comes in black, blue and pink. It has a strong steel frame with lovely fat tyres that have a clever bent valve, making them easy to pump up. The Stompee reminds me of a BMX bike.

The Stompee sells for about £50, which I think is quite reasonable. It’s a very durable bike, it’s been used for a year and still in great condition, ready to be handed down to a very excited Little Missy!

Have your little ones had a balance bike? What was the transition to a regular pedal bike like?