This year Coventry Transport Museum had a 9.5 million pound face lift! So we thought we’d make a day of it. It was a real treat to go on a day when enthusiasts had all brought their dinky cars (not sure of their official name) for a bit of a show and tell.

Coventry Transport Museum has this fantastic massive space out front, great for a parade of beautiful cars.

Munashe and Zori chose their favourites 🙂

Before you go to the museum do be aware, it’s rather big! Being home to a vast quantity of vehicles it’s kind of got to be. It’s probably best to allow at least 2-3 hours to go around. This museum is a perfect day out for a vehicle enthusiast. And it’s free, which is awesome! One of Munashe’s first words was car (pronounced ‘dar’). Instead of going to sleep cuddling a teddy bear he would be clutching two wooden cars. So this day out was a hit with our little munchkins. Having an older car loving brother means Zori enjoys brumming a car around the living room just as much as Munashe.

The museum goes through the history of transportation, along with bikes, cars and other vehicles from back in the day, they are displayed alongside videos and activities to engage young and old.

There are a whole array of cars to be seen, en-route thought the museum Munashe practiced his motor racing moves and decided he’d quite like to own this Jaguar when he’s able to drive!

Coventry transport museum is home to the worlds fastest car (at the time of writing), the Thrust SSC set the world land speed record, at a massive 763mph back in 1997. This record may be broken at the end of the year by the Bloodhound. The Thurst SSC is a definite must see. The car (if you can call it that) is massive and resembles more of a rocket than a car. They even have a 4D simulator (for a fee). Sounds a little scary but fun. Simulating going at 763mph, not your average roller coaster sim!

The little Munchkins enjoyed designing a fast car and putting it to the test 🙂 They managed 762mph. Not Bad!

To finish off, here was one of my favorite dinky cars. Very cute with the only door right at the front! 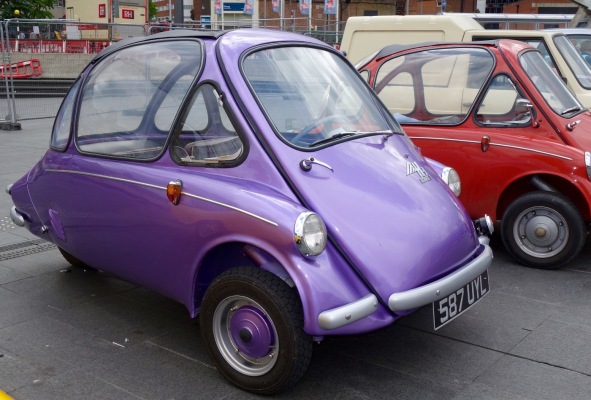